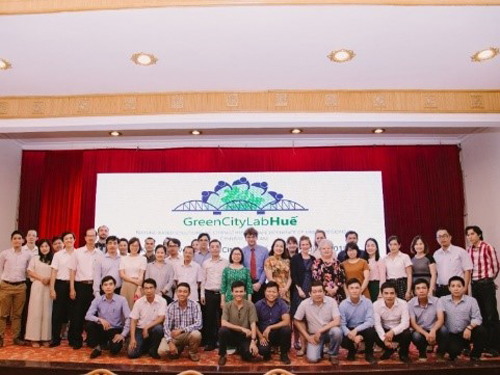 On October 24th, the GreenCityLab Hue had its solemn start during a kickoff event in the Huong Giang Hotel in Hue. Among project partners and a public at large the project and its backgrounds were presented and discussed.

The GreenCityLabHue has the objective to create a multi-level, multi-disciplinary space for research and experimentation to develop, visualize, evaluate and discuss ideas and concepts for the (re-)creation and expansion of green-blue infrastructure (GBI) in the city of Hue, Central Vietnam. Carried out by the Mientrung Institute in Hue in cooperation with the Humboldt University of Berlin and the Independent Institute for Environmental Issues, nature-based solutions and GBI shall be further integrated into Hue’s city planning in order to help to protect various ecosystem services.

Contributions from the speakers as well as comments from the audience underlined the important role of the promotion of green and blue infrastructure for the development of Hue City. Whereby one comment pointed out, that the concept of GBI is not a new concept to the city of Hue, rather a new term for the maintenance of green and blue areas that always was done with a high priority and should be strengthened in the future. One of the major challenges will be the integration of the numerous related stakeholder including the public on the one hand and to pave the way from theoretical knowledge into action on the ground on the other hand. The next step will be to develop a common understanding and shared definition of Green blue infrastructure for the context of Hue.

After the kick off meeting in Hue, the GreenCityLabHue project was also presented during the German Science Day, organised by the German Federal Ministry of Education and Research (BMBF) and the German Embassy in Hanoi on October 30th. There, beside a presentation of the GreenCityLab Hue project to further German and Vietnamese Scientists, it was also discussed during a poster session. The German Science Day also gave the opportunity to exchange experience and knowledge and to learn about other projects in Vietnam that are funded by the BMBF. The German ambassador highlighted in his opening speech the importance of German-Vietnamese cooperation in environmental science and Vietnam’s Vice Minister for the Environment expressed the need for international research projects to tackle the challenges of climate change and other environmental issues.