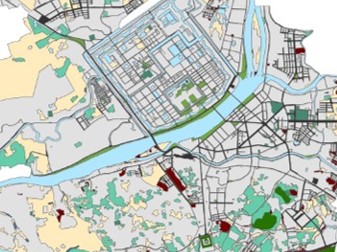 Urban areas are both drivers of global warming and especially affected by its impacts. In this context, nature-based solutions (NBS), and as such the enhancement and expansion of green-blue infrastructure (GBI), are gaining importance in strategic urban planning as measures for climate adaptation and mitigation. Additionally, access to GBI is linked to issues of well-being, environmental justice, and human health.

The project GreenCityLabHuế aims to strengthen the climate resilience of the city of Hue (Thua Thien Hue Province, Central Vietnam) through nature-based solutions (NBS) with a focus on heat adaptation and air quality improvement. It will create a multidisciplinary research and experimental space to develop, test, visualise, discuss and implement ideas and concepts on the restoration and expansion of green-blue infrastructure (GBI), and thus for the promotion and implementation of NBS, in the urban area of Hue.

During its definition phase, the GreenCityLabHuế project compiled a typology on GBI elements and, based on this, first narratives and scenarios for GBI development in Hue, and conducted initial research on the current situation and preconditions for future developments of GBI in Hue, which were summarised in the project’s status quo report.

Hue is one of the oldest urban areas in Vietnam. The core city encompasses an area of about 71 km² and is one of the most densely populated Vietnamese cities. With about 12.9 m²/person, the green space per capita is comparatively high in Hue. However, green (and blue) spaces are not equally distributed across the city – with access to green areas being particularly limited in the historical centre of the city – giving rise to the implementation of new GBI elements.

A preliminary assessment of climate change impacts indicates generally warmer future conditions and an increasing total precipitation; the city of Hue will likely face low to moderate increases in near-surface air temperature (both annual averaged and extreme), and a moderate to high increase in precipitation. These estimated impacts will likely exacerbate existing environmental challenges in Hue including heat stress and flooding. Other pressing environmental issues, especially in the denser core city and university area, are air and noise pollution.

Based on co-creation and co-learning, the GreenCityLabHuế project suggests a typology of 64 GBI elements for consideration, including amongst others different types of private, commercial and institutional GBI elements, allotments and community gardens, recreational parks and gardens, and agricultural GBI. Whilst most of these key elements are common in both (Central) Vietnam and Germany (and Europe), some types were identified that are unique to the city of Hue, including blue-green gardens, garden cafes, and garden houses. This typology, in combination with an analysis of the relevant policy framework and a review of former, recent, and proposed projects for the implementation of NBS in Hue will serve as the basis for the modelling of land-use change scenarios for the city, and for the evaluation of the benefits of enhancing GBI across Hue.

Alongside the implementation of new green (and blue) areas, the necessity to preserve, maintain and improve existing elements of GBI has also been recognised. This includes, e.g., the maintenance of street tree density through annual tree planting campaigns, as particularly matured trees are under pressure due to climate change.

The enhancement of Hue’s GBI shall address the aforementioned environmental challenges by improving the provisioning of ecosystem services and by increasing the city’s resilience towards extreme weather events and climate change. However, also the economic and societal benefits of GBI are targeted, including the positioning of Hue as (eco-)tourism destination, the creation of job opportunities, establishment of competitive advantages over other Vietnamese cities, the improvement of quality of life through the creation of public spaces, and the increase of public awareness towards the benefits of green and blue elements as NBS.

The full Status quo Report can be downloaded here: 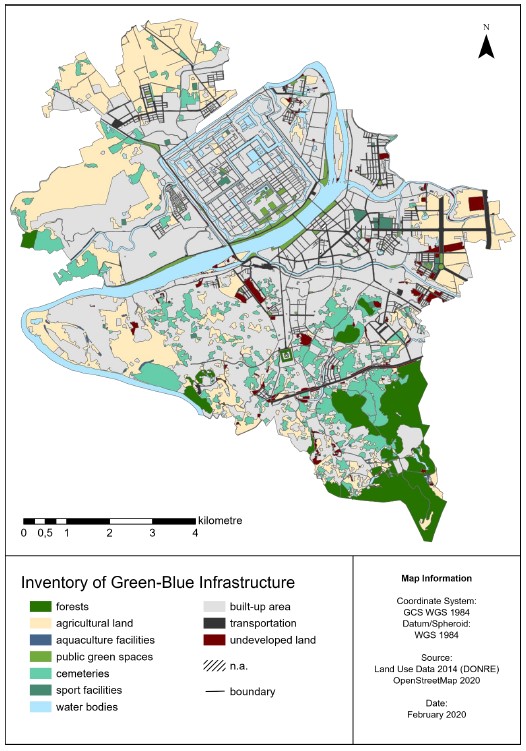 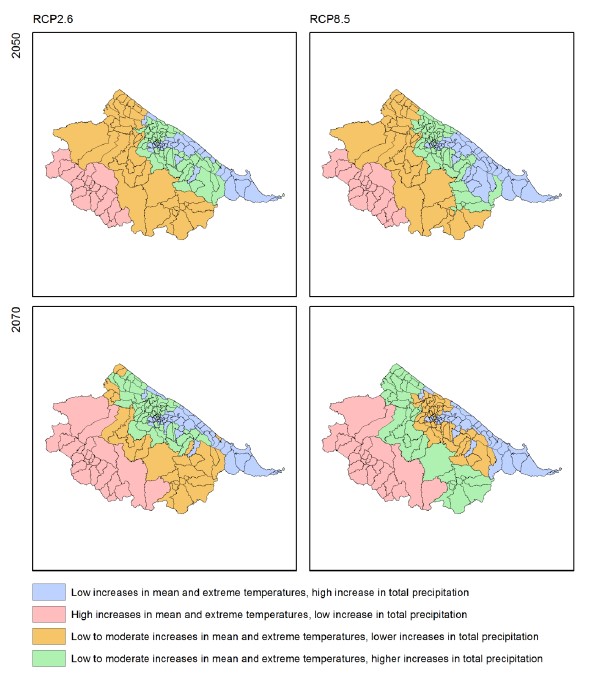 Combined trends in climatic indicators for the years 2050 and 2070, and for RCP scenarios RCP2.6 and RCP8.5 respectively 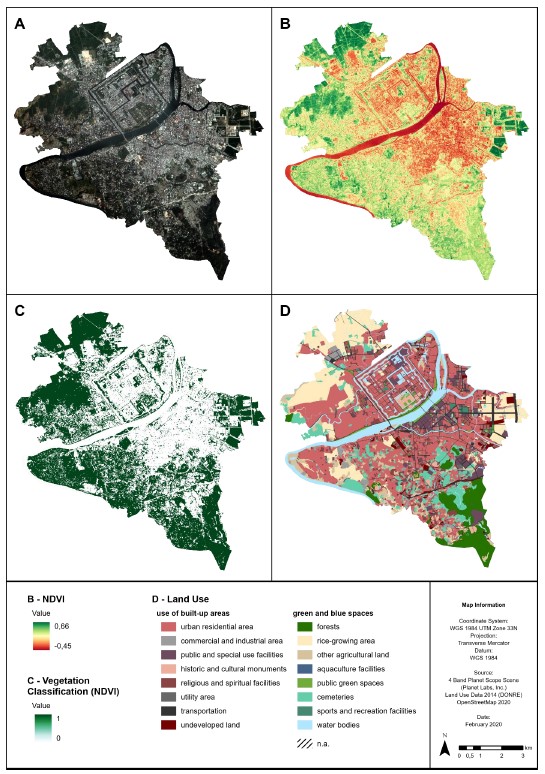 PlanetScope satellite image of the city of Hue on 20th February 2020 (A), the Earth observation indicator normalised difference vegetation index (NDVI) calculated based on the PlanetScope image (B), vegetation classification based on the NDVI (C) and land use map (D)